The Radical Innovation and Entrepreneurship Program (COI STREAM) brings together industry and academia to research and create practical applications for innovative issues that must be tackled in order to bring about the society and way of life we should have ten years in the future. It is a research and development project implemented by the Ministry of Education, Culture, Sports, Science and Technology in partnership with the Japan Science and Technology Agency (JST).
In 2013, Hirosaki University was selected as one of 12 COIs spread across Japan. Dubbed the Center of Healthy Aging Innovation, its COI employs big data from the Iwaki Health Promotion Project to develop prediction methods for dementia and lifestyle diseases as well as research and commercialize preventative measures for those diseases. By applying this work to society, the COI seeks to improve the health and life expectancy of the elderly as well as lower medical costs by reducing the number of elderly patients suffering from dementia and lifestyle diseases.
Ultimately, this will improve quality of life and create a “healthy society with long life expectancy” brought about by the utilization of big health data and the latest science (see figure below).
Hirosaki University’s COI captured the attention of the nation when, during the JST’s interim evaluation in the summer of 2019, it was awarded as the highest evaluation, the grade of “S+,”
Furthermore, it was introduced that Hirosaki COI won “Prime Minister Prize” of 1st Japan Open Innovation Prize in the government’s “White Paper on Science and Technology 2019 ”. 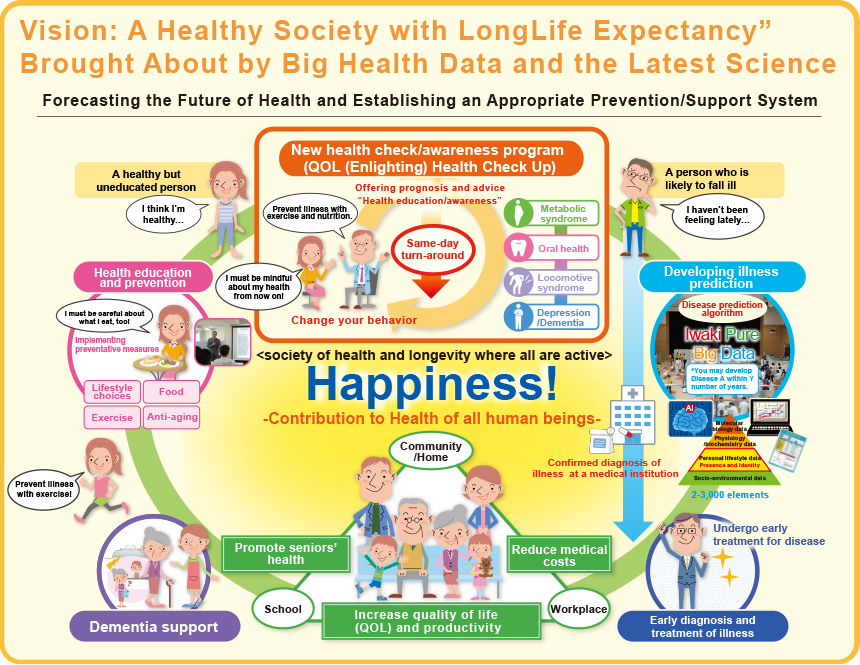 Japan is an aging society. According to a Cabinet Office survey, as of 2018, 28.1% of its total population is above the age of 65 . By 2035, this number is expected to grow to 32.8%, and 38.1% by 2060.2 This means promoting seniors’ health and reducing medical costs is a problem facing our society.
Aomori Prefecture is not only an aging society, but one in which illness and mortality rates are high for age-related/lifestyle diseases, resulting in a shortened life expectancy for its citizens. Every five years the Ministry of Health, Labor and Welfare ranks the average life expectancy across Japan, and Aomori currently ranks the lowest in the country. Men have occupied the lowest rank since 1985 and Aomori’s womenjoined this lowest ranking in 2000.
At Hirosaki University, Shigeyuki Nakaji (research professor at Hirosaki University, Graduate School of Medicine, Department of Social Medicine) is leading the fight to redeem Aomori from its reputation as the prefecture with thelowest life expectancy. Since 2005, he has conducted an annual large-scale health survey for the residents of Iwaki-ku (formerly Iwaki-cho) in Hirosaki. This is known as the Iwaki Health Promotion Project Check-up (“Iwaki Check-up”), an important collaborative platform for health-related research that brings together all of Hirosaki University (the faculties of Medicine, Education, Science & Technology, Humanities & Social Sciences, and Agriculture & Life Science), the local government, citizens, businesses, and research organizations.
Every year around 1000 citizens participate in the Iwaki-Check-up. Add to this annual surveys of nearly 500 elementary and middle school students from the same district (fifth year and older), and when the citizen health data obtained from check-ups (big health data comprised of 2-3000 data elements) is included, the number of participants swells to over 20 thousand people.
This research is central to the Hirosaki University COI, which employs a decade’s worth of Iwaki Check-up big health data for R&D and commercialization.
Over 40 well-known companies are collaborating with the Center, including Kao, Lion, Aeon Retail, Eisai, the Benesse Corporation, Kyowa Hakko Bio, Kagome, House foods group, Kracie holdings, Lawson, Suntory International, Fancl, and others. Together with the university’s home city of Hirosaki, Aomori Prefecture, they have established a strong network combining industry, academia, the government, and the private sector.
Furthermore, Kyushu University’s School of Medicine, the Kyoto Prefectural University of Medicine, Meio University, Wakayama Medical Univversity have joined the COI’s efforts as satellite centers to create a robust research initiative system.
*2:Cabinet Office, “White Paper on the Aging Society 2019” 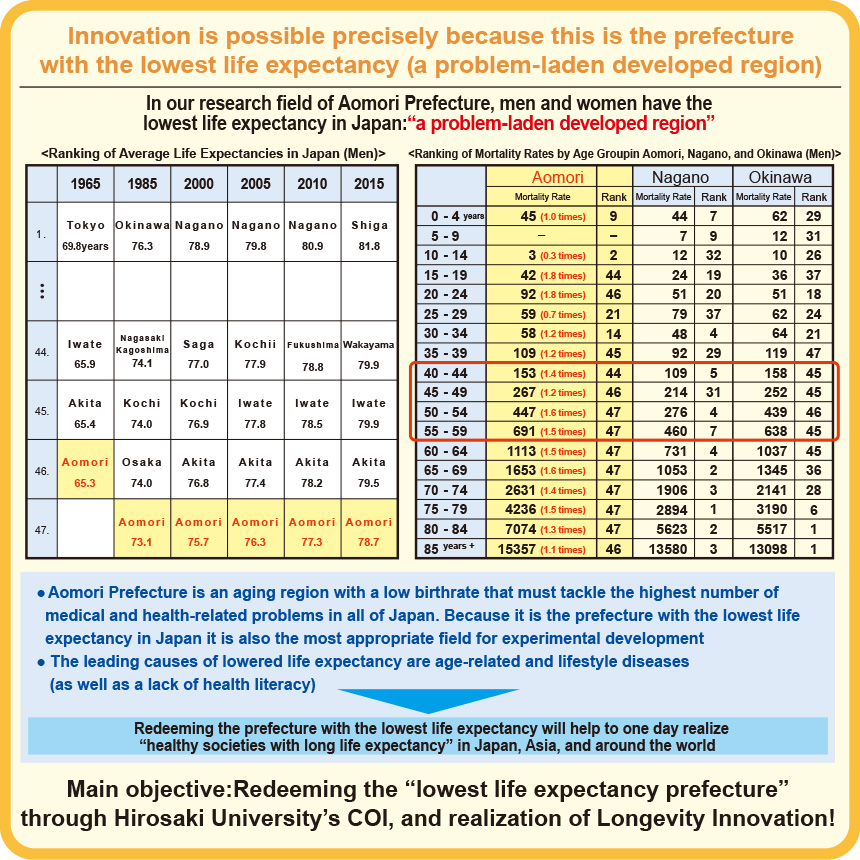 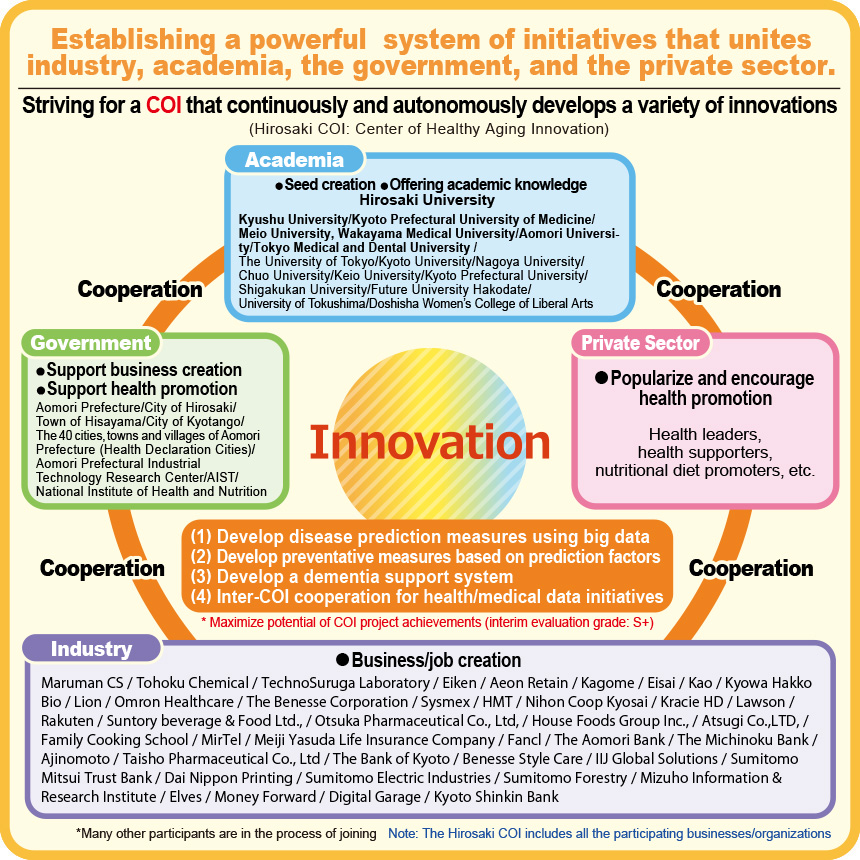